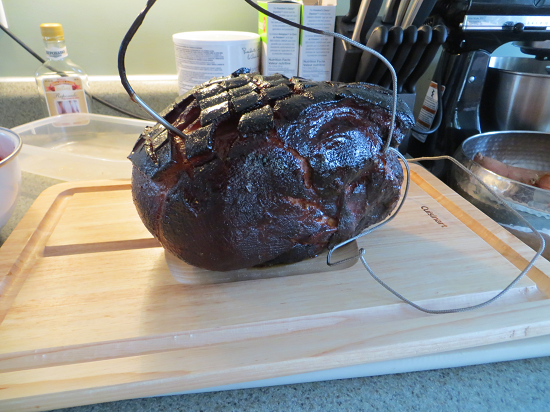 During my time using my Big Green Egg, I have done mostly chicken and beef. They are a lot quicker than pulled pork or even ribs. So unless you are having guests over, you don’t try something that takes all day. Well, we had some friends over for dinner and as we were planning the menu weeks ago, I wanted to try something new but still something that had little chance of failure.

The worst thing you can do when expecting guests for dinner is to do something new that may not turn out. Then you are stuck serving food that you are not proud of, or you just give up and order pizza. I know the classics such as beer can chicken or chicken thighs would have been a hit, but it would have been pretty boring for me.

The answer turned out to be smoking a 10 lb. ham. Based on how much we all enjoyed it, I was glad I decided to ham it up.

Tequila Ham or as I was calling it, The Drunken Pig

1. Take ham out of fridge and let it get to room temperature.

2. Prepare BGE for indirect cooking. You want the temperature set at 250 F before you put the ham on.

3. While the Egg is getting to temp, score your ham with a sharp knife. Make a checkerboard pattern on the top of the ham. This will let all the flavours of the glaze get into the ham. Once you have scored the ham, brush it with olive oil. 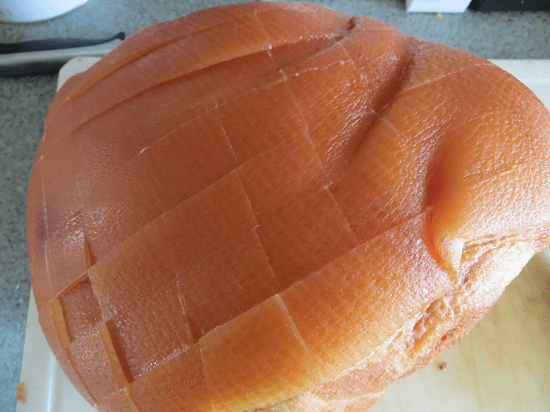 4. Once the Egg is ready, add your soaked wood chips, add a plate setter if you have one and then a drip pan with the chopped up apples, oranges, some water and any of the tequila if there is some left. Then add the grill on top. Let some of the wood burn off before putting ham on.

5. Place ham on the grill with the scored part facing up. Stick a digital thermometer in the ham and close the lid. You want the internal temperature to reach 160 F before taking the ham off. This should take about 4-5 hours. I read you want to cook your ham 1 hour for every 2 pounds. 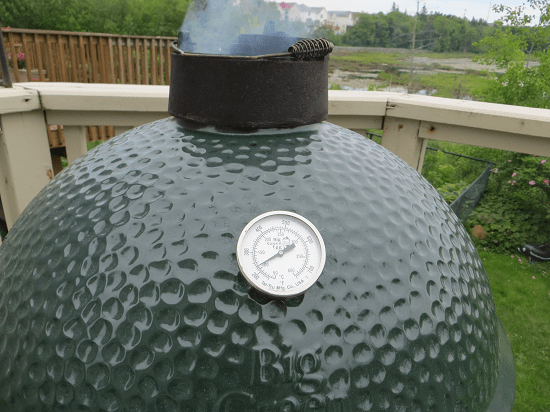 6. Prepare the glaze. Mix the pepper, mustard seed, tequila, brown sugar, honey, molasses and sugar in a bowl and mix up. Put aside for later.

7. Wait for 3 hours and then start glazing. When you life the lid up the first time you will be amazed at how dark the ham is. From this point on I pretty much glazed the ham every 20-30 minutes until it was done. 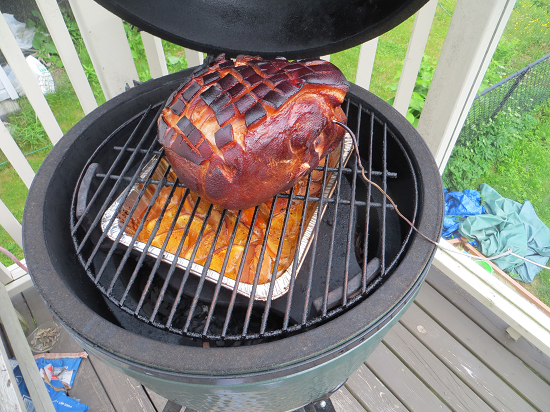 8. Monitor the thermometer until the ham hits 160 F and take the ham off.

9. Set it in the house on a cutting board or plate and let it rest for at least 25 minutes. The temperature probably won’t even drop. This lets the juices build up. If you finish cooking sooner than expected, foil it and let it rest until you want to serve.

10. Slice the ham and serve. Want to know how to slice a ham? I watched this video. I need to work on my slicing for next time. It was pretty much the only thing I could have done better. 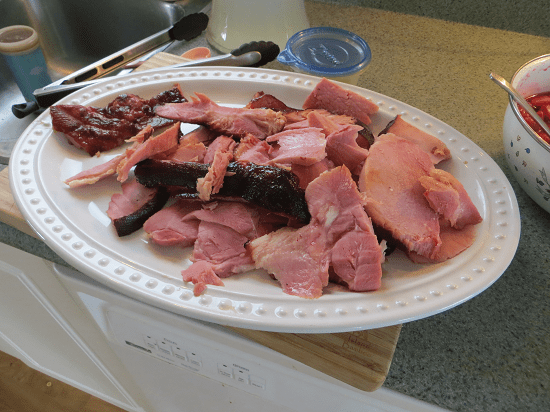 The end results were amazing. I took a little bite before serving and was blown away. The meat was juicy and you could taste the tequila. The crusty skin was even better. I offered a little piece of ham to my wife before putting the large platter out for guests and her reaction was just what I was looking for.

Our friends also gobbled up the ham. Even the one friend who as we heard, is not that fond of ham. Score one for the Big Green Egg. As the plate was getting empty, I asked if I should cut some more. The only answer I heard was “Uh, yeah, you probably should”.

This recipe will be added to the pile of meals we will do again. It covered all the requirements for me. It was fun to do, pretty easy and the end results were fantastic. Next time I will try a whiskey or bourbon glaze I think.

Don’t Get Burned Buying Your Next BBQ

Thanksgiving On The Grill