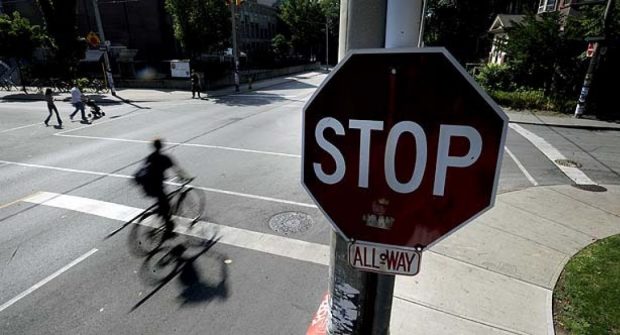 You noticed I called them “bike riders”. They are not cyclists in my eyes. To me a cyclist rides for exercise, sport and the love of having a fine tuned machine as their mode of transport. I also bet they follow the rules of the road.

Since the summer began, the amount of “bike riders” in our area has increased dramatically. Duh. It’s nice out. It’s better than being stuck on a streetcar and it’s great to get that breeze in your face. But….

It’s also a time for more annoying and somewhat dangerous experiences when walking.

The cross walk at the end of our street is a 3-way intersection with our street being a one-way. There is a bike lane of the main street we connect with. It’s just houses really.

So what happens is, bike riders like to cruise through the intersection without ever stopping. Honest. I watch and actually make a point of noting when a bike rider stops. It has not happened in many weeks. Hell I will take a slow roll or yield.

I have heard the tales of unwritten rules of not having to stop, but if there are people crossing the road. Stop.

Even when I have the kids with me crossing the road. They don’t stop. They seem annoyed we are in the way. They hate it when I say something.

It’s pretty easy. Stop at the stop sign. You are basically a car. You are not above the law just cause it’s extra work to stop and start riding again.

In case you are wondering:

A cyclist faces a $110 fine for disobeying a stop sign. (The penalties include fine and fees.)

I get it. Stopping that sweet momentum is shit. It’s way easier just to keep on cruising. Well life is a bitch ain’t it.

It’s gotten to the point where our 7-year old chirps at bikers who don’t stop. He knows the rules, why don’t they? Oh, they do. They just know it’s not enforced and life inside their own bubble is pretty chill.

There are neighbourhood threads on Facebook where multiple people share the same annoyances. So I know it’s not me being a grumpy old man.

How about people just follow rules and think about others first? Is that too much to ask?

I try not to get worked up. But it’s pretty damn hard when you know in a few years your kids will be walking to school by themselves on that exact cross walk and not only do you have to worry about cars, but now lazy bike riders too?

Would I be in the wrong just to push one off their bike now and then? Sure is tempting. But that would not be following social norms and rules right? It sure would get the message across though.

In case anyone is wondering, my ‘hood is Parkdale, but I am pretty sure this problem happens all over Toronto and in many other cities where cycling is huge.

So I ask nicely to all bike riders, cyclists, pedestrians, drivers etc……PULL YOUR HEAD OUT OF YOUR ASS, and stick to the rules.

But until then, I am going to daydream about bike rider tipping. It makes me happy.

Buying Our First House in Toronto