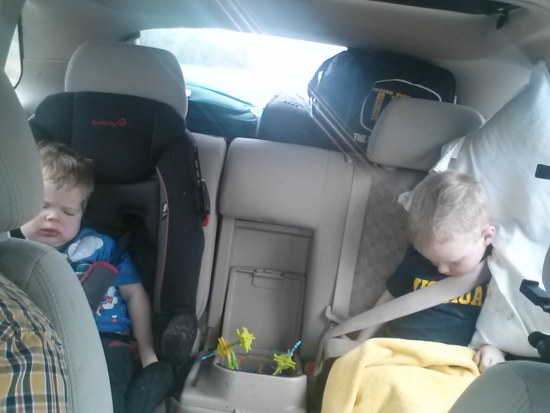 Traveling with children under five can be hard. But if you are prepared and have some luck, you can get through it without too much pain.

We have driven to Boston before and to Ontario before with one kid. Harrison did great on those trips. The first one he was in diapers, so it was easy to keep rolling down the highway. The second time there were many more stops as Harrison just started toilet training, but it all worked out.

This trip, it was going to be three days in the car with two boys. One four, one 18 months. There would be pit stops, hotel stops, sanity stops, a lot of snacks and hopefully a lot of naps.

Charlie has only been in the car for three hours at most for one trip, so we did not know what to expect. Spoiler alert, he was amazing.

We left Halifax on Wednesday morning with the goal of being in Toronto by Friday afternoon.

The car was stocked with:

This was just for the kids to survive the car.

The first leg of the trip was Halifax to Fredericton.

For the boys, there was just too much to look at. The trip was just starting, it was fun and it was exciting. We had just packed up our house and the thrill was in the air. That meant basically no napping.

We snacked, we sang songs, we listened to music and we did our best to stay happy. Charlie dozed for a bit with no problem in his car seat but Harry could not get comfy.

We had fun lunches at fast food places. We counted trucks and we enjoyed the landscape of New Brunswick.

The hotel, it was a sight for sore eyes. We were all beat. There was a pool and a hot tub and we relaxed there before a Boston Pizza dinner.

Harry and I checked out the local Chapters while Katie put Charlie to bed, and then we all turned in early. Long day. Another long day on Thursday.

Back into the car the next morning. The goal for the day, Montreal.

This day was the heavy driving day and the boys were stars. They had good naps, played nice with toys and Harry watched Planes. We were worried that Charlie would freak out with not having a movie in front of him, but he did his own thing.

Again, fast food lunches, breaks to stretch the legs and a lot of scenery.

Pulling into Montreal sure got the juices flowing. It was busy, fast and full of energy. Our trusty GPS helped us find a hotel and we settled in.

The boys were toast, so we had a fun room service dinner that we called a Spider-Man Picnic.

I had a smoked meat sandwich that was amazing. I also hung out in the hotel bar later that night watch hoops while the boys slept.

Fun day, almost to our new home. Again, the boys for the most part were excellent passengers. You can’t fault them for being hyper as the traffic got more busy.

Friday, well that was a crazy day. We just wanted it to be over. Katie drove us through downtown Montreal to start and she drove us on the 401 into Toronto to end it. She was gassed.

The drive was half a day and we made great time before unloading the car just before 5 pm.

The boys napped and loved seeing all the truck action on the 401.

The snack bag was almost gone, the car was full of garbage and loose snacks and we were done the biggest road trip of our lives.

Both boys were great. No real issues to complain about. We did not even get lost and for us that is a major milestone.