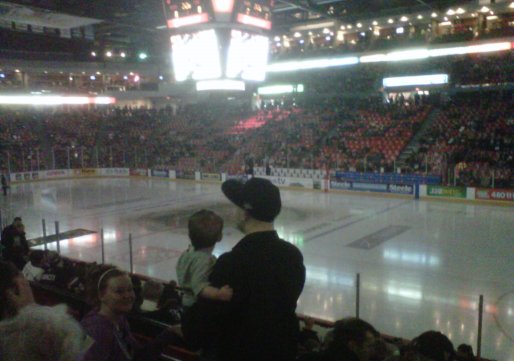 Yesterday was the day, it was the day Harrison and I were going to the Halifax Mooseheads game. I got tickets for Christmas and as soon as I saw it was a Sunday afternoon game, I knew who I was taking. The thought of taking our three-year old to his first live hockey game was one of those dad moments I have been looking forward for over many years.

For those hockey fans, the Moose were playing the Acadia-Bathhurst Titan. Halifax is one of the best teams in the country, so I knew Harrison was going to see a lot goals and hear a lot of noise. Spoiler alert – Here is the final score.

The only tricky part of the whole day was going to be the game being played when Harrison usually has his afternoon nap. He can go the whole day but it can make the end of the day a real mess.

But we were pretty confident that excitement would pull him through. It did.

We headed down to the Halifax Metro Centre about an hour before game time. That would give us plenty of time to find parking and get settled. I did not want to get to our seats that early and waste a lot of Harrison’s “interest” time. I was also hoping he would have a little nap in the car. No chance. He chattered to himself in the back seat about what he was going to see. Then I mentioned popcorn and it was over. He was ready.

Just driving close to the Metro Centre, Harrison saw all the people walking to the game with their jerseys and hats and anything else they were using to show their support.

He saw highlights on the screen outside the arena. Everything to really bring home the point to where we were going. Oh and he saw a lot of big trucks, so that was a bonus.

We parked, we walked over and then we entered the throng. The Moose are dominating this year, therefore the crowds are huge. It was close to sell out on this day so there were a lot of people. Harrison took it all in stride and stuck by me as we had our tickets scanned.

Then we went to get popcorn and drinks before making our way to Section 5.

As we entered the bowl area where you can first see the ice, I made a really effort to catch Harrison’s face. As expected he was wowed.

Side note: I forgot to put my memory card in the camera, so all my photos from this day are of the cell phone nature.

Anyways, back to entering the ice area. We walked down to our seats and go comfy. On the seats were they pieces of cardboard to fold up and turn into a clapping device. Those were a big hit.

Harrison sat there with his popcorn and just watched in awe. He was hooked. Just looking at him still in his coat and hat, munching on popcorn while staring at the players warming up, it was enough to think to myself:

If he becomes a NHL hockey player, this is his a-ha story. 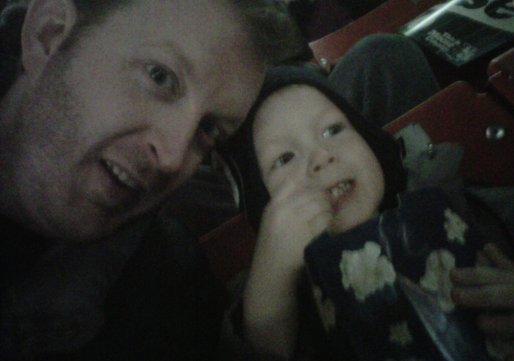 For the next 15 minutes, it was all about me just watching him taking it all in. He was adapting quickly and loving it. The noise was not bothering him. He was looking around and telling me about things. He was engaged.

There were people dressed in Moose outfits, dinosaur outfits and of course Hal, the Mooseheads mascot. They were all instant friends.

Then the game started and we were lucky to have the Mooseheads shooting at our end of the rink. It was probably a good 75% in front of  us and there was a lot to cheer for. The Moose were all over the Titan.

Then the moment to test if Harrison really would love it – the first goal.

The place blew up with screaming, loud horns and clapping. Oh and of course thousands of those cardboard clapper things.

He was cheering as if he were a regular. We did high fives and I really made sure he knew what was going on.

It was amazing to watch how much fun he had at three-years of age.

During the first intermission there was a short Tim-Bits hockey game full of kids not much older than Harrison. He loved that. I could hear the cash registers ringing at this point because I think he will want to play hockey.

The second period was a little boring as the game was at the other end of the rink. Luckily the Moose kept scoring and that made for a lot of fun.

Midway through the period, the no nap issue was hitting home. The noise was starting to bother Harrison and he even curled up in his chair a few times.

He sat on my lap for the last half of the period and we decided to go for a walk at intermission.

We toured the whole place and did a full circle.

We also went and picked up a keep sake for the day, a mini hockey stick with the Mooseheads logo on it. That was a hit.

Finally, the third period started and instead of going back to our seats, Harrison asked to go home. It was time. We had our fun.

Besides from a getting out of dodge perspective, it was ideal.

We said goodbye to the Mooseheads, got the car and drove home.

The entire way home Harrison was going on about we he saw. We were chanting MOOOOOOSEHEADS and having the perfect ending to a fun outing.

No nap, no tantrums, just fun.

Then we got home and had to tell mom all about it.

For about 9o minutes after getting home, Harrison and I played hockey on the carpet with his new stick. He is hooked. He loves hockey. How typically Canadian eh?

So, Harrison had a day to remember. He is telling everyone he sees about the game. The game, where the Mooseheads won 11-3.

But the score won’t be what I remember. It won’t be the popcorn or the crowd cheering. It won’t be forgetting the memory card or having to leave before the game ended.

This day for me will go down in the memory books as the day I got to go to a hockey game with my son for the first time. My wife jokingly asked if I had a moment of tearing up. I don’t think I did, but I certainly had a lot of awesome dad feelings. It was awesome.

I can’t wait to do that with Charlie in a few years and I can see Mooseheads games being a big part of our lives (or a new city).

It made the list of Top 10 dad moments for  me easy and I know there are so many more to come.

Dear Present Day Self, It’s Me, Past Self

A Dad’s Life: Moving With Kids

Recounting A #Snowday In #Halifax With Photos