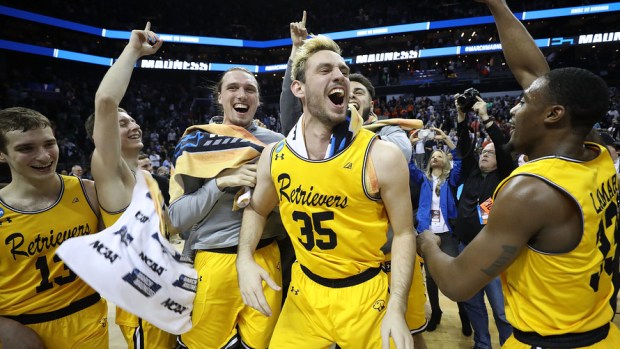 The following story is as true as it is hard to believe.

It’s always easy to look back once history has been made and say, I called that, but sometimes, it’s just how it goes. As we head to the 2018 Final Four in San Antonio, something I thought would never be mentioned again, came up today while I walked the kids to school.

The something that came up? Well it’s a tale that Harry may hold over me for the history of time. He made a choice and then changed it thanks to something I said.

What the hell am I talking about? Well as they say on the National, first a little back story.

My earliest memory of watching NCAA basketball goes back to the days where Patrick Ewing patrolled the lane for the Georgetown Hoyas. I totally had the t-shirt with the dog on it. I loved Big East hoops before it got blown up. I of course fell in love with March Madness.

Keith Smart, Danny Manning, Stacey King and so many others were God Like to me. It was like Christmas. This basketball tournament that was on TV for three weekends in a row.

If I was not already on board for life, my true LOVE, the Michigan Wolverines, made this improbable run in 1989 when they fired their coach right before the tournament and Glen Rice was a NBA Jam character on FIRE for six games. They made the Final Four and that was when I knew basketball would own my stress levels for life.

They kept pulling upsets. The beat the Illinois Fighting Illini in the semis and then beat the Seton Hall Pirates in the finals on the two most stressful free throws ever. Thanks Rumeal Robinson.

I watched the game in my parent’s basement in full panic mode and then full celebration mode. I even have the BETA MAX tape for it somewhere.

That was the ultimate Final Four moment to date for me.

Fast forward 30 years that included the Fab Five breaking my heart and too many wins for Duke, Kentucky, Carolina, Syracuse etc. and you can tell the tourney is part of my life.

So how great was it when I landed in a new family that not only had a love for this tournament, but they also had a pool. Not just any pool, The Toronto Rocks Pool. Real money on the line. Real trash talk among friends and family. Real battle lines. ARE YOU KIDDING? Sign me up.

To this day I have participated in over 10 years of pooling and the best I did was 2nd thanks to Kemba Walker going NUCLEAR in 2011.

I look forward to this pool every year, even though I don’t watch the sport as much as I used to. I will be honest, I don’t really know what’s going on until March. I watch the conference tournaments to get warmed up and by weekend two, I am all in once again.

This year we have a Loyola of Chicago squad to get on board with just in case you can’t stomach the blue bloods winning all the time.

Don’t worry I am getting to the point.

This year, life has come full circle as Harry, our 8-year old son, joined the family pool for the first time, picking his own teams.

So not only was Michigan putting a streak together, I would get to enjoy the games with the whole family. Charlie (5) joined Katie’s team as a co-pilot until he is old enough.

It’s been a blast. We literally all yelled for joy when Kansas hit a big three in OT to beat Duke. We were a family united with the goal of pushing Mom and Dad further into the top slots of the pool.

It was also a memory for me that warmed my hoop heart. The teams were tied with under a minute left when Charlie muttered, my tummy is scared, as he was glued to the screen. He gets it. He gets my love of this tournament. It was a shining moment.

So, what did Harry bring up on the way to school? Let me break the silence I was hoping to never have to share.

On the day before the tournament started, I opened up Harry’s pool account so he could make his picks. I did not watch. I did not offer input. I did not try to sway him. I was already pleased to know he was going for Michigan as a fan.

He made his picks, asked little questions, wanted a short explanation on seeds and that was it.

Just a guy filling out his first ever #brackets yep he is certainly my kid. Even has some solid upsets listed. Good luck H. #marchmadness #ncaatournament #youngballer

I said I would take a look just to make sure he completed everything and added the tie breaker score.

All looked fine except for one obvious mistake in my eyes.

Buddy, you sure you want to do this one here? It’s never happened in the history of the tournament. Did you mean to click that one?

Harry looked again and I think he caved to my slight pressuring and immediately was like, oh no, let me change that. He did, he posted his picks. Life moved on.

Can anyone see where I am going with this? Any guesses?

Bounce back to today on the walk to school. Harry asked if I remembered the pick he made that he changed cause I pointed it out.

In my head, I felt pretty bad. I was like, yes Harry I remember that you had UMBC beating the Virginia Cavaliers in the first round.

He was not mad. He just casually said, man that would have been great for my pool.

Yes, It sure would have been. Imagine, his first pool ever and he picked the first 16 seed to beat a 1 seed EVER.

Would he have won the pool? No idea. But he would have had bragging rights for years to come. He could have been a character of folklore. The boy who saw upsets.

Now, was it a mistaken click. Who knows. I just know there will always be small amount of guilt that my historical bias swayed his fresh outlook.

As a dad, I will have to remember this example when he suggests doing something that I think is crazy. I need to let him make his own choices and experience the success and failures. I need to let him think for himself and support his vision. Unless it really is harmful crazy of course.

So there, I did not think I would have to admit this blunder of parenting that happened on a quiet March afternoon. But because he did not forget, I am sharing it with all of you. Putting it on the record.

To the fans of Loyola-Chicago, Michigan, Villanova or Kansas, enjoy the games this weekend and try to remain calm.

To the members of the Rock Pool, our household is still gunning for second.

To everyone else – While it’s hard to look past the shit show that is the NCAA (pick a reason), remember the joys and heartaches of these kids. They play like it’s their life and that is so refreshing.

To Sister Jean, get ready to sing Hail to the Victors on Saturday night.

In Our House It’s All About The Blue Jays #OurMoment

Brother vs. Brother: Dawn Of Justice