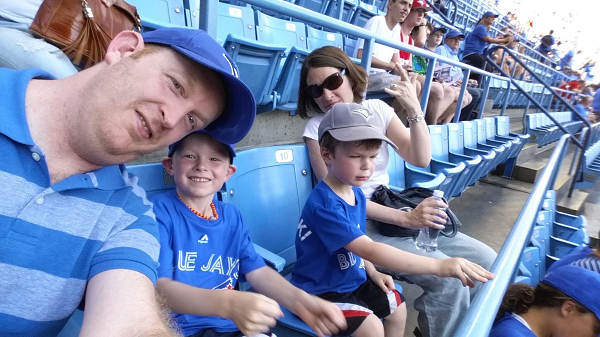 Did Joshie hit a home run?

Did Pillar make a crazy catch??

Can we go to another game?

These are all daily questions in our house. From April until October, the Toronto Blue Jays take over the chatter in our family and it was a perfect storm of events that got us to that point.

First, our boys are of the age where baseball becomes fun and interesting. Harry (6) went to his first game two years ago and has been hooked ever since.

Charlie (3) just wants to do and like what his big brother likes, so it was easy for him to become a Junior Jay.

They play in the backyard. Harry has entered the world of organized teeball and baseball. Their Nana has been doing her best to promote her Jays fandom for years. It was bound to stick at some point.

Second, we moved back to Toronto in 2014. That meant hearing about the Jays in the news more. That meant actually being able to go to the games. That meant getting caught up in the hype very easily.

Third, that hype. The Jays are good. They are really good. That makes everyone excited to the point where we watch almost every game on TV now. I certainly did not do that a few years ago. Forget House of Cards, my wife and I end up watching Buck and Pat.

So you combine seeing the game through the eyes of your kids, being close to the action and the team challenging for a World Series and that is how it all went down.

It has been a wild ride for the last two years. Harry knows every player and has recently discovered stats. Not sure if he will be Moneyballing anytime soon, but it sure brings me back to being that age.

I had sticker books and card collections to keep me engaged. I did not have 24 sports channels, Youtube and Game Centers. I had to find out the scores the following morning on the news. But I loved my sticker books and cards. Every Sunday after church we got some money to spend at the store. My sister went for candy, I went for anything baseball. I still have some of those sticker books today and I will show the boys eventually.

A few weeks ago we had our first family Jays game where all four of us went. It was a lot of fun for the most part. It’s never quite that perfect idea you have in your head, but we did good for the first try. Sure, getting food can be a chore and dealing with the other 47,000 people can be tedious, but it was a joy to see how the boys acted.

They cheered, danced, clapped and were engaged in the game. The Jays lost 2-1, but at least we saw a Michael Saunders blast. Figures the following day there were endless hits, homers and runs. Oh well, next time.

Our weekends have started to revolve around the Jays. Those 1pm starts are great for me. That is when the boys usually have their quiet time. So I get to watch/doze for the first couple of innings until the boys are back and we watch the game together.

What gets Harry the most excited? It would have to be when his guy Kevin Pillar is up.

Kevin Pillar in the making.

For Charlie, he is a Tulo fan or as he has to point out every time, it’s Tulowitzki.

Watching all of these games is rubbing off on Harry in another way. His actual baseball talent has exploded in the last few months. He has always had a knack for hitting, but his fielding has really progressed. I think you learn a lot from watching and then doing. He sees the ball better now and goes after a fly ball just like one of his idols.

Yes the #bluejays lost, but it was the best night for this 3 year old fan. We survived the heat, the crowds and even one bucket of popcorn between 2 kids. Fun night out for the family. #toronto #ourmoment

Charlie also has gotten pretty good at hitting. They will make quite the dynamic duo in the lineup one day.

Harry Getting Ready For The Blue Jays #OurMoment