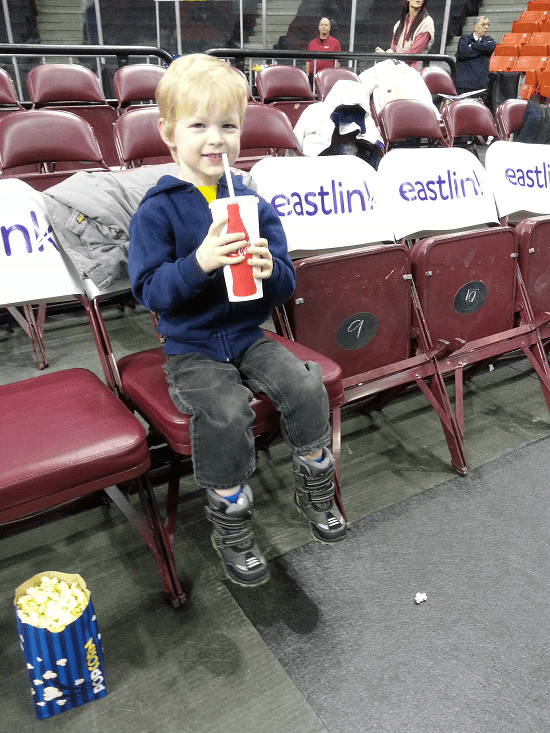 One of Harrison`s Christmas presents was tickets to go and see a Halifax Rainmen game. We have been to see the Halifax Mooseheads a few times, but never to a Rainmen game.

Harrison loves basketball and watches it on TV whenever I am watching it. He is even starting to get the rules of the game. For some reason, he loves it when the ball gets stolen. Anyways.

Sunday was being referred to as “no nap day“ because the game was at 2pm, which is usually when the boys nap.

I was looking forward to the game as well because live basketball (no matter the level) is always a treat. I have been a hoops fan for most of my life, so I would never say no to going to a game.

The exciting part was our seats were on the floor right behind the basket.

So we bundled up and headed down  to the Metro Centre where the Rainmen play.

The game was against the Saint John Mill Rats. I have no idea what a Mill Rat is, but I knew they were a better team than Halifax.

The Rainmen are not having a good season, so my expectations for a win were pretty low.

We got our snacks (popcorn always) and found our seats. They were really close. We could hear what the players were saying to each other as they warmed up.

After some quality time with his popcorn, Harrison started to soak up the atmosphere. Every time there was a good dance song on, he was out of his chair doing some kind of dance. 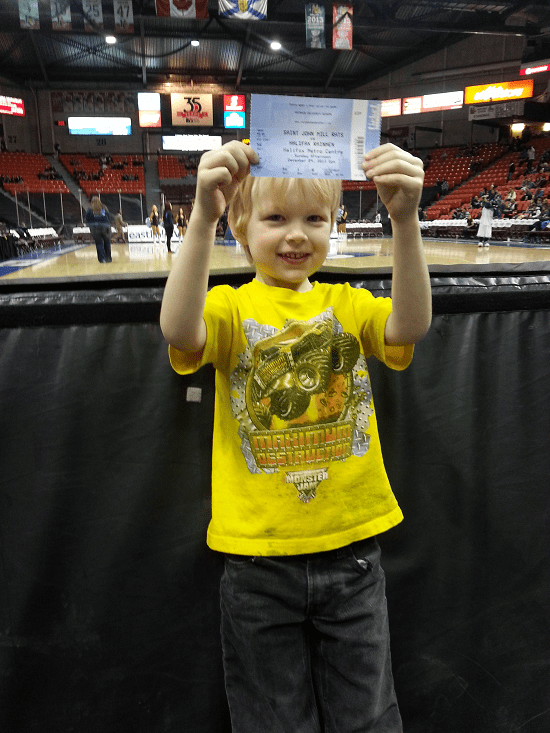 It was nice to be down on the floor because if he wanted to get up and move around it was pretty easy. We were not stuck in a row on people. In fact, we were the only ones in our row of chairs. Yes the Rainmen are not exactly selling out this season.

The game went as expected. The Mill Rats put on an offensive display of layups and three pointers and were quickly up by 20. This lead never really was challenged. The Rainmen put up a few runs but never anything that could chip away at the big lead.

We walked around a few times to see the game from different vantage points and of course there were a few bathroom trips. That was a lot of stairs.

For the most part Harrison had a great time but by the time the fourth quarter rolled around, he was done. The lack of a nap was hitting him and the loud music was giving him a headache.

The final highlight came just before we went home.

The “Jam Cam“ was on the big screen, where they would show fans dancing in their seats.

Suddenly, Harrison was on the big screen dancing and for about two seconds he did not figure out it was him.

Then he did and a big smile hit his face and he started dancing even faster. That was pretty cool to see. Of course that is the part of the day that he was talking about most of all when we got home.

We packed up, left the building and walked back to the car.

I later heard the Rainmen in fact lost by over 20 points. So we did not miss some epic comeback.

It was a fun afternoon for this dad as I got to see our son experience and enjoy live sports once again.

Hopefully one day soon, we can step up our game and go and see the Toronto Raptors play. One part of the Mooseheads game that Harrison really loved was the loud crowd and the chanting. It was hard to get in the mood with such a small Sunday crowd in downtown Halifax.

I hope the Rainmen can turn it around soon and then the crowds should start to grow.