The PL stands for Parental Leave, which I am currently doing for six months.

Don’t worry family and friends who look forward to the PL Daily, I am trying my best here. It is just hard to get motivated to write every day. A lot has been happening this week, so if this turns into a week wrap up, don’t get all technical on me. Charlie is growing up faster than this blog can go. Every day he is adding something new and I am taking the time to just enjoy it rather than sharing it with you. What has he been doing that is so great? Well I will get to that later. The title of this post should give away two items that involves Charlie. With August hitting, it means I have two months left on my parental leave. Where did the time go? I mean, two months is still a long time, but it already feels like it is going to end in days. Better enjoy it while I can.

Day 85 was also Coolio’s 50th birthday and I would have to say my time with Charlie to date has been a fantastic voyage to say the least.

Yes, where do I begin with this guy. He is a bull charging all over the house. His no-nonsense approach to getting to where he wants to go is hilarious. Does not matter what gets in the way, he is moving it. This week he has been pulling up on everything and standing very sturdily. It was only a few weeks ago that he figured out how to crawl. So, next week is walking? Yesterday we went to the library and he was putting on a show. Going up stairs, pulling up on toys and waving and sticking his nose right into what the other kids were doing. Other parents were quite surprised when I said he was not even 10-months old yet. It was really great to see him play with other kids and move around on his own. I can only imagine how awesome it must feel to have that new-found freedom.

Last night after dinner, Katie was cleaning up and I was in charge of burning some energy off the boys before bed. We hit the back yard. Charlie was racing all over the place. I would put him down on one side of the yard and he would crawl to the other and try to pull up on the fence. He did this at least five times. He also tried to climb into the sandbox which was funny. Harrison invented a game where you had to run, step on a foot pump, kick an inflatable whale and do a circle around Charlie. I have no idea where it came from, but it kept him entertained and running. Charlie found it funny as well. After Charlie went to bed, Harrison and I did some gardening. I would throw all the weeds on to the grass and he would rake them up. Quite the gardening team.

With Charlie’s new-found crawling and reaching, that also means watching what he gets his hands on. His favourite, little cars. We have been working on NO and seeing if he understands. When a car goes in the mouth, someone says NO. When lego goes into his mouth, someone says NO Charlie. He seems to get it. The problem now is, he does get it and is already choosing to ignore it. It is funny to hear his older brother saying it. No Chaw-lee, don’t eat my toys.

Okay, so this happened on Wednesday but I wanted to share it with you. We were at the Skateboard park/playground in Halifax and I was approached by a fan. It was kind of weird and cool all at the same time. A fan of the blog recognized me and came over to say hi, comment on his enjoyment of the blog and ask some questions about parental leave. I was flattered. I guess that is what happens when you put your life online like that. If that fan reads this, thanks for saying hi and it was great to meet you. I hope you get a few months of that parental leave you were hoping for.

Photo of the Day

He is supposed to be sleeping. 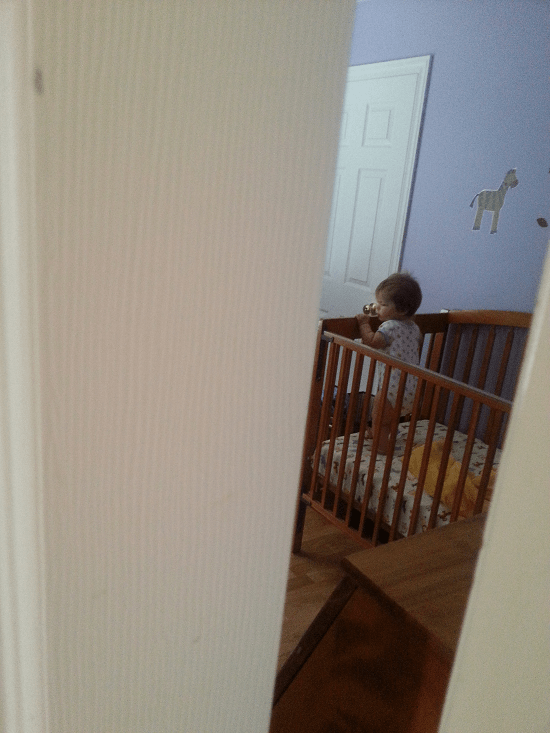 I still remember the night I heard those words. It was late after school and I was enjoying another pseudo-therapy session with a fellow teacher. Sitting in our classrooms, venting about the tough year we were both enduring, trying to laugh about our woes. Except she was nearly crying, and she shared this confession with me. Sadly, it wasn’t the first time I had heard it. It is all too common, the young teacher learning to fear parenthood. Just the other day someone asked me why some teachers decide not to have children because of the job. It is not an easy question to answer, but I can try.

The Newest Addition to the Cusden-Rock Family

Dear Present Day Self, It’s Me, Past Self

A Dad’s Life: Moving With Kids