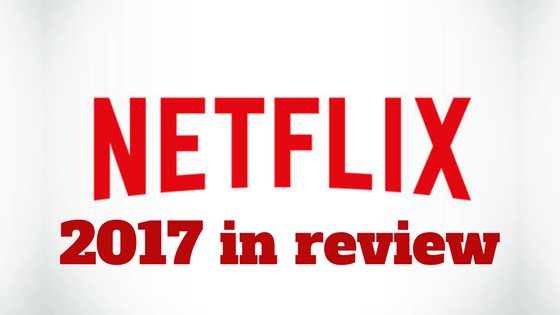 You know what’s great about having your own blog? You can write whatever you want and rank things in the exact order you want. No group or team to please. No algorythms to follow. Just what I think.

With 2017 coming to an end, I thought it would be fun to look back at my Netflix viewing history and rank the 10 best things I watched over the past 12 months.

As a member of the Netflix Canada #StreamTeam it’s easy to get buried in kid’s programming and what I should be looking out for as a parent.

But let’s be real. Every parent needs their own time and their own shows to binge-watch when that precious amount of time becomes present. As you all know, time to watch TV can be a real battle, so Netflix has been a God Send for creating your own viewing schedule. No waiting a week for the next episode. How did parents of previous generations do it?

So, let’s stop with the formalities and get to the year in review and of course my overall Top 10 rankings. 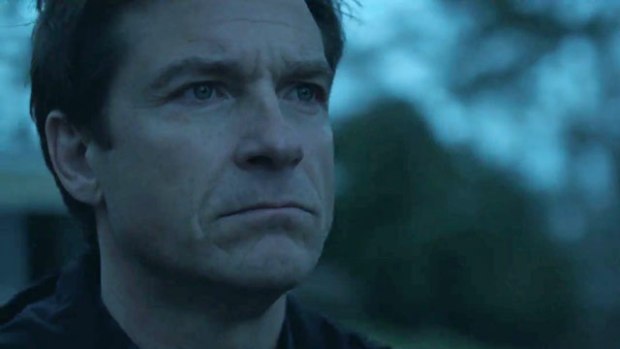 Most Disappointing Show
House of Cards S5. Not for the actual show, but for what happened with Kevin Spacey. Doesn’t make me want to watch again.
Runner up – Bloodline S3

Favourite Documentary
Where to Invade Next
Runner up – What the Health

Worst Movie
Assassin’s Creed
Runner up – Why Him 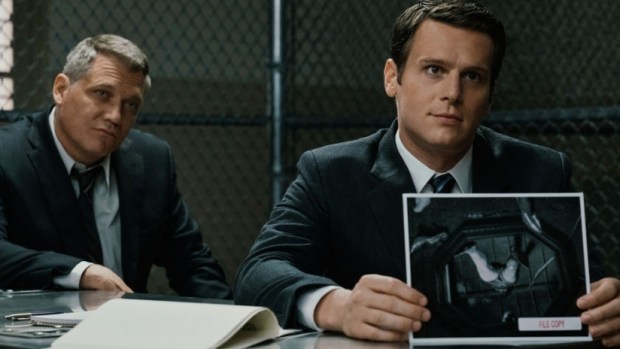 That’s my wrap. Discuss. Disagree. What’s your list? What are you looking forward to in 2018? I can’t wait for more Ozarks and having time to watch The Punisher.

Also even though I feel like everyone already has Netflix, if you know someone who doesn’t, it makes for a great Christmas gift. Check out their website for more. 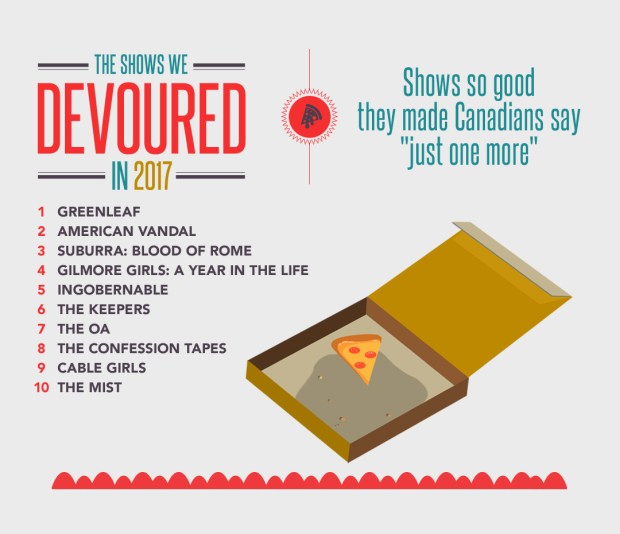 What a difference a year makes. We learned how to launder money (Ozark) and profile serial killers (MINDHUNTER). That life is better with wrestling (GLOW) and just as crazy without Pablo (Narcos). And once again, that Eleven is not to be messed with (Stranger Things). The only thing we didn’t learn… who drew the dicks (American Vandal).

2017 brought a lot of learning and also, A LOT of watching. Netflix members around the world watched more than 140 million hours per day.

Canadians started the year off bingeing with Sunday, January 1 being the most popular streaming day (1). This trend continued throughout 2017 as Canada ranked second globally for having the most members to binge Netflix every single day. Amongst these dedicated Netflix users was one Canadian that watched The Lord of the Rings: The Return of the King 361 times in 2017!

There’s much to say about what we watched, but how we watched was also intriguing. Though bingeing was standard in 2017, not all series were enjoyed in the same way by Canadians…

We took an escape from reality in 2017 by devouring (watching more than two hours per day) drama series likes of Greenleaf, Suburra: Blood on Rome and Ingobernable. The question of ‘whodunit’ (and didn’t do it) in The Keepers and The Confession Tapes also had us watching with might.

Greenleaf
American Vandal
Suburra: Blood on Rome
Gilmore Girls: A Year in the Life
Ingobernable
The Keepers
The OA
The Confession Tapes
Cable Girls
The Mist

We needed a laugh this year and found that solace by savouring (watching less than two hours per day) shows like Wet Hot American Summer: Ten Years Later, Friends from College and Big Mouth. We also took care to enjoy the splendor of The Crown (it is a visual feast fit for a queen after all).

We couldn’t resist the thrill of a thrill and shamelessly watched ahead of our significant others on Narcos, Ozark, Black Mirror and more (don’t tell Marty).

Whether for the adventure, Chief Hopper or bromance (#DadSteve), Netflix members ranked Stranger Things as the top show to watch together as a family. Nostalgia also scored top points for family watching via Fuller House and Gilmore Girls: A Year in the Life.

Forget Secretly Cheating, We Just Do Our Own Thing